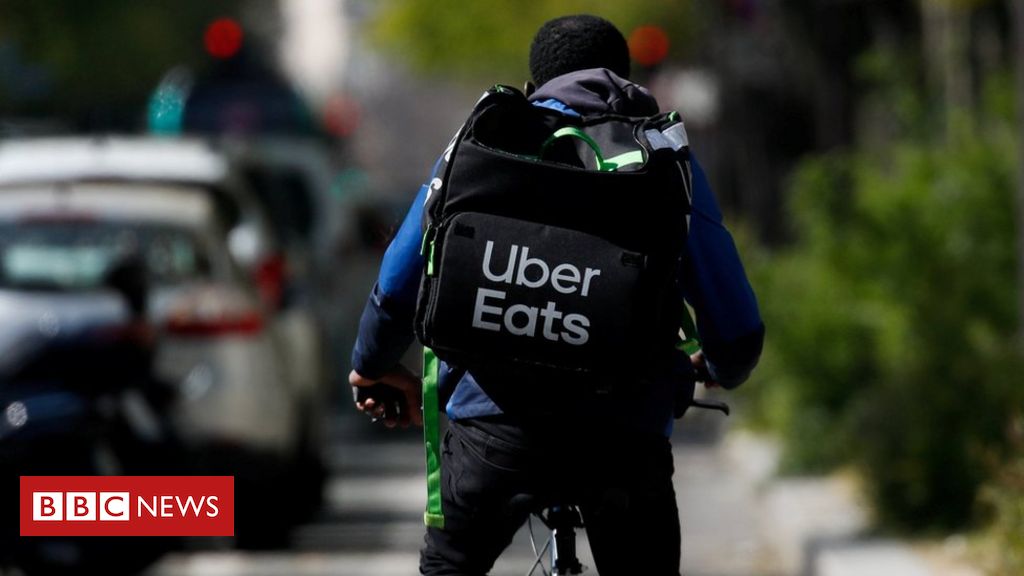 
The number of customers active on Uber’s apps has dropped nearly in half since last year as the pandemic devastates demand for the company’s taxi services.

The ride-hailing giant said it had an average of 55 million customers each month in the April-June period, down from 99 million last year.

The fall came despite a boom in its food delivery business, which saw orders more than double.

But trip bookings were down 75%.

That is just a slight recovery from the plunge seen at the height of the lockdowns this spring, when the rides business collapsed as much as 80%.

Uber chief executive Dara Khosrowshahi said the two sides of the business will help the firm navigate the challenges ahead. In the quarter, food delivery brought in more revenue than rides.

“The bottom line is we have taken swift action on everything that’s within our control.”

Uber has been working to offset the collapse of its core taxi business due to the pandemic by increasing its food delivery operations.

Last month, it launched a feature that allows users in some cities in the US, Canada, Brazil, Chile, Colombia and Peru to order groceries through its app. The move comes after the firm took a majority stake in Chilean start-up Cornershop last year.

It also announced a deal in July to buy US restaurant delivery start-up Postmates for $2.65bn – a move that could give it control of an estimated 30% of the American market.

Uber said Uber Eats revenue doubled to $1.2bn in the quarter, as people worried about coronavirus continued to order in rather than eat out.

Overall quarterly revenue dropped 29% year-on-year, falling to $2.2bn, as the rides business weighed on results. Revenue Uber collected from trips fell 67% to $790m, while gross bookings – the total dollars from the trips – were down 75% to $3bn.

In cities where the virus is under control, demand has bounced back, Mr Khosrowshahi said.

“We haven’t seen any signs now that there will be any kind of permanent damage to the business,” he said.

Uber said its losses had narrowed to about $1.8bn, from $5.2bn a year ago, when its listing on the stock exchange swelled costs.

The improvement also follows Uber’s announcement in May that it was taking steps to slash costs by $1bn including cutting 6,700 jobs – roughly a quarter of its workforce.

The figures did not include drivers, which the firm considers independent contractors.

That position has drawn multiple lawsuits, including one filed this week by California’s Labor Commissioner.

Mr Khosrowshahi said he thought the firm had a “strong path” to fight those claims or win support among state voters for legislation that would overturn a California law intended to force Uber to change its driver classification.