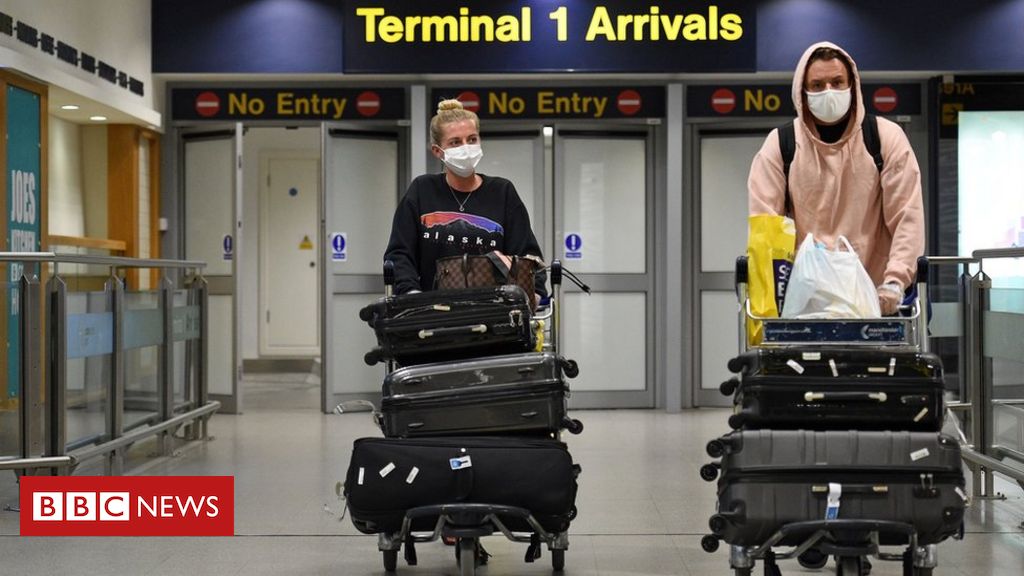 
People arriving in England from countries including France, Spain, Germany and Italy will no longer need to quarantine from 10 July, the Department for Transport has confirmed.

A full list of exempt countries posing “a reduced risk” from coronavirus will be published on Friday.

Most travellers to the UK currently have to self-isolate for two weeks.

The quarantine restrictions came into force in early June, to try to prevent coronavirus being brought in at a time when infections in the UK were falling.

The new exemptions mean people arriving from selected destinations will be able to enter England without needing to self-isolate, unless they have been in or transited through non-exempt countries in the preceding 14 days.

About 60 countries are expected to be included, according to BBC Newsnight’s political editor Nick Watt.

However, the announcement did not guarantee reciprocal arrangements with foreign countries – meaning travellers from the UK may have to self-isolate on arrival there.

The Department for Transport (DfT) added the devolved administrations “will set out their own approach to exemptions” and passengers returning to Scotland, Wales and Northern Ireland “should ensure they follow the laws and guidance which applies there”.

Last week the Scottish government said it had not yet made a final decision on easing restrictions on international travel.

The Welsh government is also yet to decide whether it will follow England in relaxing restrictions. In Northern Ireland, quarantine regulations remain in place for travellers arriving from outside the UK and the Republic of Ireland.

The confirmation of the first four countries to be exempt in England follows weeks of speculation over how the quarantine rules could be relaxed.

Last weekend the government said a traffic light system would be introduced, with countries classified as green, amber or red, depending on the prevalence of coronavirus.

Ministers have been under pressure to ease quarantine measures because of the impact on the travel industry, and a number of holiday companies and airlines had been urging the government to drop the arrangement.

The DfT said a risk assessment had been conducted by the Joint Biosecurity Centre, in close consultation with Public Health England and the chief medical officer.

It considered factors including the prevalence of the virus, the numbers of new cases and potential trajectory of the disease in that destination, the department said.

The list of exempted countries will be kept “under constant review”, so that if the health risks increase, self-isolation measures can be re-introduced, the DfT added.

The government said its “expectation” was that a number of the exempted countries would also not require arrivals from the UK to self-isolate and it would continue to work closely with international partners to discuss arrangements for UK travellers.

Meanwhile, the Foreign Office will also set out exemptions for a number of destinations from its current advice against non-essential international travel, which has been in place since 17 March.

“The entire nation has worked tirelessly to get to this stage, therefore safety must remain our watch word and we will not hesitate to move quickly to protect ourselves if infection rates rise in countries we are reconnecting with,” he said.

All passengers, except those on a small list of exemptions, will still be required to provide contact information on arrival in the UK, including details of countries or territories they have been in or through during the previous 14 days.

A spokesman for trade association Airlines UK said the announcement was “very welcome” and meant airlines would “be able to re-start services to many key markets in time for peak summer travel”.

“There’s no doubt quarantine has had a devastating impact on our industry and whilst it’s welcome the government has removed its blanket ban we would encourage rigour and science is applied in all future decisions surrounding our businesses,” he said.

The quarantine policy has also been criticised by some Tory MPs, including former transport minister Theresa Villiers.

She said it had caused “damage” to the travel industry without cutting the risk from coronavirus.

The announcement comes as the prime minister is due to lead a press conference, ahead of businesses including pubs, restaurants, hairdressers and cinemas reopening in England on Saturday.