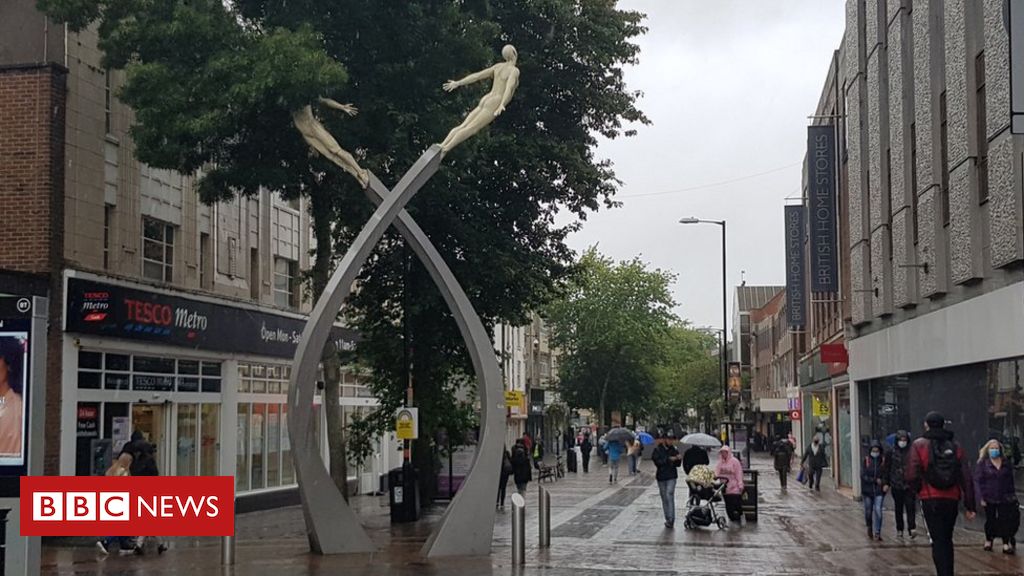 Coronavirus in Northampton: ‘I wake up and hope we have no lockdown’

Coronavirus in Northampton: ‘I wake up and hope we have no lockdown’


A town where hundreds of factory workers tested positive for Covid-19 now has the highest rate of new cases in England. What does that mean for traders on an already struggling High Street?

Even before nearly 300 people tested positive for coronavirus at a sandwich factory, Northampton was already on a watchlist.

The county’s police chief had warned the county town was “odds on” for a lockdown unless people took precautions and residents were being urged to “limit contact” with people “outside their household”.

When news broke of the positive tests at the Greencore site, borough council leader Jonathan Nunn described it as a “huge disaster” but said the authority “hopes that it is still the case” that a lockdown could be avoided.

A local lockdown, like the one less than 40 miles (64km) away in Leicester, would have further serious implications.

For many businesses in the town, it is a nervous time.

‘I worked through the darkest hours of lockdown’

Steffans Jewellers has been a feature of Northampton town centre for more than 40 years.

Owner Wes Souter said sales have been “very positive” since the national lockdown was eased but is concerned about the pressure the pandemic is putting on business owners.

“I worked through the darkest hours of lockdown,” he said, revealing how he spent days in the closed Abington Square-based business dealing with online orders and “fearing we were going to have looting”.

He said: “This is a story of anxiety and fear. For a lot of business owners that is what it looks like.”

With the busy Christmas period approaching, Mr Souter said he has not been able to have a holiday this year.

The potential for a Northampton lockdown has added to his concerns, with questions swirling around whether he would be able to furlough staff or which businesses would have to close.

“If the advice is go into lockdown, stay away from town centres but businesses don’t have to close and we don’t get assistance, what happens then?

“It is the waking up every morning thinking ‘I hope Northampton doesn’t get locked down today’.”

In total, 262 new cases of coronavirus were recorded in Northampton in the week ending last Saturday – three times as many as the previous week.

There were 97 cases recorded on 10 August alone and 94 the day after, although these figures were initially higher until the data was updated on Wednesday.

While this gives Northampton the highest rate of new infections in England for the week – nearly 117 in every 100,000 residents – across England overall, the rate was 12 per 100,000.

However, the vast majority of Northampton’s cases for the week – 208 – came from the Moulton area of the town, which is home to the Greencore factory

The next highest area was the town centre and Semilong, where 12 cases were recorded in the week to 14 August.

Northampton town centre had its struggles before the world had even heard of Covid-19.

On Abington Street – the main thoroughfare – about a third of units are vacant, with retail giants like M&S, BHS and House of Fraser having disappeared from the town centre landscape.

The borough council has acknowledged it “wanted something better for the town” and last year unveiled plans to use money from the government’s Future High Streets Fund to tackle some of the long-standing issues.

One thing they want is more independent shops and cafes.

Cafe Track, situated in the central Market Square and operating as a social enterprise, fits the bill perfectly.

Yet the eatery, which helps people with autism into employment, has not reopened since the country entered lockdown.

Owner Tom Cliffe said they were planning to do so on 3 August, but a Covid-19 testing centre opened right outside the cafe’s doors.

While Mr Cliffe says such testing is essential, he had to postpone the reopening as only six people can sit inside the cafe.

He said the centre is essential to try and prevent the town going into a local lockdown but is hoping it can be moved elsewhere.

Ultimately though, Mr Cliffe wants to help do everything to avoid lockdown: “If that means it is negative for us but saves the town then that’s a good thing.

“There’s a lot of small, independent and brilliant businesses that would struggle.”

One of those independent businesses is Vintage Guru, a two-storey St Giles Street shop which features a market place style cluster of small traders.

It turned two on Tuesday and owner Julie Teckman said trading figures have remained stable since it was able to reopen.

But she said the “town is really struggling” and while some customers “act like nothing has happened,” others are “really worried”.

“Some days we are in the top 10, others we are not so people don’t know what is true,” she said.

She said she hopes the authorities can “pull off” avoiding a local lockdown.

“The town centre has been knocked down and it hasn’t had a chance to get back up again.

“It is all very well having loans to keep us ticking over, but you need to know there is something to come back to.”