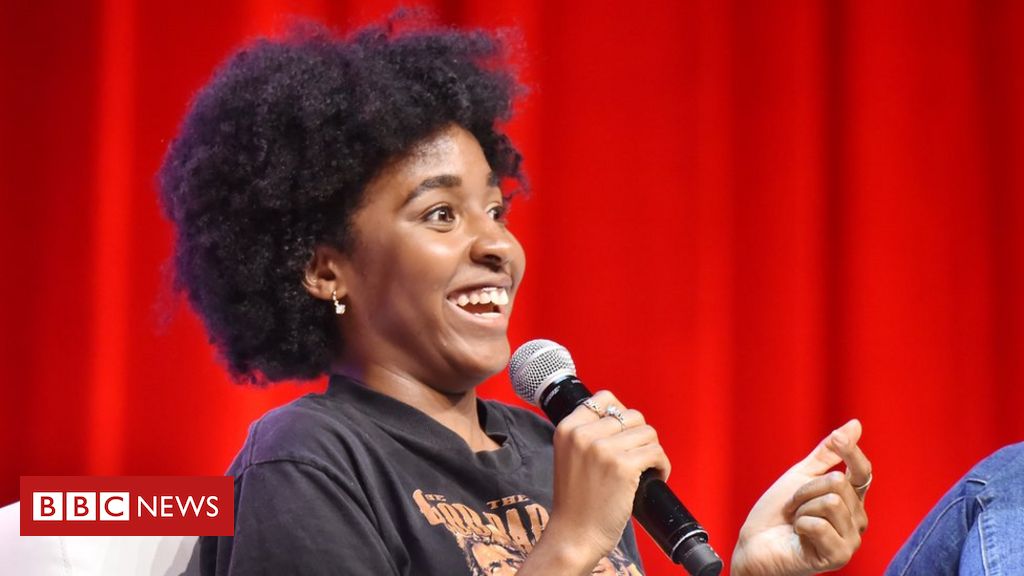 
For comedian Ayo Edebiri the coronavirus pandemic has been no laughing matter – in more ways than one.

People losing their lives to a deadly virus – or Black Lives Matter protests in the wake of the shocking death of George Floyd – hardly provided rich picking for jokes.

And then there was the problem with comedy venues closing en masse during lockdown. Back in March she correctly predicted to a Los Angeles audience that her stand-up gig that night was likely to be her last for a while.

Lockdowns meant venues around the world where stand-ups would perform had to shut down – thousands of performances were cancelled.

For London-based comedian Kate Smurthwaite, this meant a £16,000 loss in bookings – a mixture of stand-up performances, festivals, teaching and workshops – throughout the year.

Also, many travel and accommodation fees were paid in advance, and it hasn’t been possible to receive refunds for all of them.

“In the first part of lockdown I was just in financial freefall and I ended up going online and putting myself forward as a maths tutor because it was the only thing I could think of to do,” Smurthwaite says.

As well as on-stage comedians, support services such as venue staff, bartenders, sound technicians, festival organisers, and others, are affected.

“Those folks are responsible for comedy happening and they were hit hard by this – it’s horrible,” says Caleb Hearon, a Los Angeles-based comedian and writer.

Some comedians have received financial support from their governments, but this has only plugged a small gap – more worrying is the fact that post-pandemic, they may not have performance venues.

Some half (49.2%) of comedy clubs in the UK say they will definitely face permanent closure without further funding or support, according to a Live Comedy Association (LCA) survey.

The UK government is providing £1.5bn emergency arts funding, but comedy was not mentioned in the announcement. British comedian Mark Watson says this follows a long history of comedy being overlooked, despite playing a big part in UK culture.

“It does deserve to be regarded in the same way as some of these other senior art forms,” he says.

The LCA has called on the government to ensure comedy clubs get a slice of funding. Otherwise, workers and comedians may need to find new careers.

Comedians have had to find new ways of performing, and virtual versions of existing set-ups have had some success, from acts performing stand-up over Zoom, to the Free Edinburgh Fringe Festival being broadcast live on Twitch.

However, comedians don’t see this as a long-term solution.

Many online shows have been used as a way for viewers to donate to good causes, or to help political fundraising efforts – meaning the money isn’t going directly to comedians, who still require their own income.

“You can’t make anywhere near as much money as you would have been able to in normal times, and while you still get the peripheral benefits by doing comedy online, you lose the sense of community of everyone converging in a shared space – so we’ve lost something quite fundamental,” says Mark Watson.

And Kate Smurthwaite says that while her News At Kate video series has gained some new sponsors, it also lost sponsors who could no longer afford to contribute because of the coronavirus crisis.

Social media has been another route comedians have tried to ensure they keep existing audiences, while also extending their number of followers.

But translating stand-up to social media is not always easy.

“In the first few months there was a big Instagram boom of comedians who were finding ways to harness content in a way that was so impressive but also really intimidating, because I felt like the things that are in my head are not going to translate to a live performance,” Ayo Edebiri says.

Edebiri, who also writes for the Netflix show Big Mouth, says it has also been more difficult to know when and what to joke about, given coronavirus and the BLM movement.

However, Brooklyn-based Sarah Cooper has had millions of views on her TikToks in which she lip syncs President Trump, while Elsa Mpho Majimbo, a journalism student from Kenya who aspires to be a comedy actor, has seen traction for her videos on Youtube and Instagram.

“Around three months ago one of my videos got super popular, so I just got a bigger audience and my growth has skyrocketed from there,” Majimbo says.

She has since signed deals with consumer brands MAC Africa beauty products and telecoms firm MTN, and is working on projects with Comedy Central, who has also put her content on its social channels.

Funds can be generated online in other ways: by people buying tickets for Zoom or other online events, post-show donations on PayPal or various other platforms, or people buying perks – such as preferential ticketing access – from comedians like Eleanor Conway, on Patreon.

Meanwhile, broadcast channels or firms could sponsor a comedian to do an online gig.

When comedy clubs are allowed to open again the numbers allowed in will have to be balanced with health and safety concerns.

“If there are still coronavirus cases… in the UK at the time when we get the green light to reopen, I fear audiences are still going to be hesitant to attend comedy clubs and theatres where hundreds of people are gathered in one room,” says Liam Pape, who manages The Covent Garden Comedy Club, the largest independent comedy club in London.

And British comedian Eleanor Conway suggests now is the time “to innovate”.

One innovation has come from Mark Watson. His Carpool Comedy Club will enable people to watch a selection of comics in a drive-in comedy tour. Comedians will be on stage and on a big screen, and people will be able to listen to them through their car speakers.

“It will feel like attending something and having that sense of community, so hopefully it will be a stepping stone between to what we had before,” he says.

Writing has been a more reliable source of revenue for many comics, but as episodes of programmes are pushed back and as competition for jobs intensifies, there is likely to be a bottleneck here.

This is an issue throughout the industry at large, which will favour those who are already at the top – and make it harder for those striving to break into a notoriously competitive business.

“It favours people who are independently wealthy or who have some other sources of income,” says Watson.

He says the LCA survey found those most likely to drift away from the industry were people from marginalised backgrounds, people who have had to fight their way into the industry.

“Comedy is only just getting to the stage where diverse talents and voices are recognised so it would be a real shame if that progress was undone.”