Coronavirus: How can we prepare for a leader falling ill? 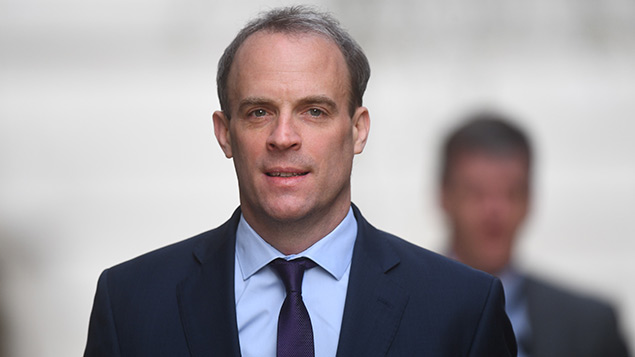 Dominic Raab is deputising for the PM while he’s in hospital. Photo: Victoria Jones/PA Wire/PA Images

With the Prime Minister in intensive care, the Cabinet is finding a new ‘business as usual’ while its leader recuperates. As more organisations could face periods of self-isolation or worse for senior managers, how can they prepare?

Government, like any other organisation during the coronavirus pandemic, is doing its best to operate under unusual and fast-moving circumstances. But its latest challenge is particularly tough – with Boris Johnson in intensive care as he receives treatment for the virus, the rest of the cabinet must continue to make key decisions without their leader.

Foreign secretary Dominic Raab is deputising for Johnson and will have to drive a number of important issues over the coming days; notably whether the three-week review of the current lockdown restrictions should be lifted on Monday.

As the infection rate of the virus hits its peak, numerous businesses could be facing similar challenges as leaders are forced to self-isolate or even end up incapacitated in hospital. According to Adam Penman, an employment lawyer at McGuireWoods, it’s vital that organisations have contingency plans in place in the event that senior managers are unable to fulfil their roles.

“The risk is that, if life events take over, a business could be perceived as less stable or effective without a robust succession plan which shareholders are convinced will work,” he says. “It is always good to be transparent about the existence of such a succession plan, if not the detail. For example, for publicly listed companies, this could be included in their prospectus or annual report.”

He adds that a communications strategy to relay to important stakeholders how the company plans to deal with issues arising from an absent leader is crucial.

Face of the business

“Companies must have a strategy to communicate to investors or other stakeholders any new reality and how they are dealing with it, whilst simultaneously respecting the privacy of the individual and their family,” advises Penman. “This will be especially important when a particular high-profile individual is intrinsically associated with that company or is the ‘face’ of that business.”

Start by identifying the highest risk roles and people, and ensure there is a plan in place” – Professor David Collings, Dublin City University

There will of course be practical implications: if a senior manager is abruptly incapacitated, who will sign cheques or have access to company bank accounts, for example? In companies anticipating a major transaction (an upcoming merger, for example) or about to sign off on an important deal, how will this be managed?

“The key in this situation is striking the balance between transparency on the one hand, and on the other avoiding creating fear and panic in the context of our society’s general state of anxiety,” urges leadership coach Tim Segaller, co-founder of Rising Minds. “So that means being up front – telling people the truth about the boss’s state of health, even if that means saying that you don’t know what the long-term prognosis is.”

He adds: “People will quickly work out if you’re trying to conceal something from them. So you should pre-empt that by levelling with them. But then it’s vital to tell them also what plans the business has in place to manage things in the short-term or long-term absence of the boss.

“If those plans aren’t fully in place yet, then be transparent about that too, and how you’re working on resolving that. You may also want to involve and recruit relevant staff members in that process. That can help them feel more of a sense of ownership and control, which can really help settle anxieties during uncertain times.”

While now might not be the time to conduct a full-scale succession planning review, HR could take some time to look at which roles could be most exposed if that person falls ill.

“Given the sheer volume of work that HR leaders have on their plate at the moment. I think the key is to prioritise where risk is highest,” says David Collings, professor of human resource management at Dublin City University’s Business School.

“I would suggest that the HR leaders should try to identify those individuals or roles which would create the biggest exposure if a leader were incapacitated. So start by identifying the highest risk roles and people and ensure there is a plan in place for those roles and people.”

He suggests organisations look at what are the “mission-critical aspects” of each role that a substitute or deputy would need to know to ensure continuity. “At a minimum these should be recorded in some way but ideally a discussion between the leader and nominated back ups would be useful. Clearly there are questions around compliance and governance which emerge in some organisations and these require careful consideration.”

Another possibility is to nominate one or two people per role or have a “back-up pool of leaders, which may allow more flexibility and increase the risk mitigation”, adds Professor Collings.

While keeping external stakeholders up to date is important, it’s crucial to handle internal communications just as – if not more – delicately.

“For your internal teams, the loss of a leader may feel quite scary and overwhelming, both from a personal point of view – being worried for a colleague and being personally touched by the effects of coronavirus,” says Charlotte Sheridan, director of consultancy firm The Small Biz Expert.

“However, there are also those who may be impacted by this in terms of the impact on their workload and uncertainty. Therefore internally it’s vital that communication is clear and unambiguous. Don’t speculate that something may wait as ‘so and so will hopefully be back next week’. Instead, be clear on who can be relied on for support both from a business and a personal perspective.”

Paul Holcroft, associate director at advisory company Croner, advocates a message from the CEO if possible. “If they feel able, the CEO could distribute a message outlining that they are self-isolating but still working as much as they can, along with a thank you to staff for their hard work,” he says.

Subsequent messages could include images from the CEO, such as from video conferencing, to show they remain a crucial part of the operations of the business, he suggests.

This is why senior staff need to ask what would happen if they couldn’t come in on Monday” – Kate Cooper, Institute of Leadership & Management

Holcroft adds: “If the CEO becomes too sick to remain actively involved in communications, staff should be informed who will be overseeing operations in their absence and that the company is prepared for this situation.

“This could be another member of senior management and, if possible, these plans should have been in place before the situation arises. While the CEO should have their privacy respected, steps should be taken to keep staff informed of their condition as much as possible.”

Stepping up, moving on

We may never know how Raab feels about being ‘designated survivor’ in the current situation, or having to step up to the caretaker role so suddenly.

Kate Cooper, head of research, policy and standards at the Institute of Leadership & Management says that organisations need to try and move forward without dwelling on whether the replacement, however temporary, has the same skills and qualities.

“Continuity planning at its essence is about preparing for something in advance that you don’t want to happen – so you can almost see how there would be an emotional reluctance to engage with that,” she says.

“However, if we’re genuinely interested in making our organisations sustainable, then every individual has to know who could do their job if they weren’t there. We need to put egos to one side to an extent, as that person might not be able to do the job quite as well or with the same flair, but nevertheless would be able to step up at a moment’s notice.”

This is particularly the case in small businesses, where there is a smaller pool of people and staff already often wear multiple hats.

She adds: “When there is a transparency around the job – who does what and how they do it – then there’s a friendliness about it. However, this doesn’t mean that anyone will do; this might happen in relatively less skilled jobs but certainly not at a senior level. This is why senior staff need to ask what would happen if they couldn’t come in on Monday.”

We now know that the unthinkable can happen, she concludes, so it pays to be prepared. “It reiterates the importance of being ready – not in the sense of preparing for every eventuality (as there will no doubt be more unpredictable ‘black swans’ or threatening ‘grey rhinos’ in the future), but we certainly need to think about it, which will make our businesses sustainable organisations that transcends the individual.