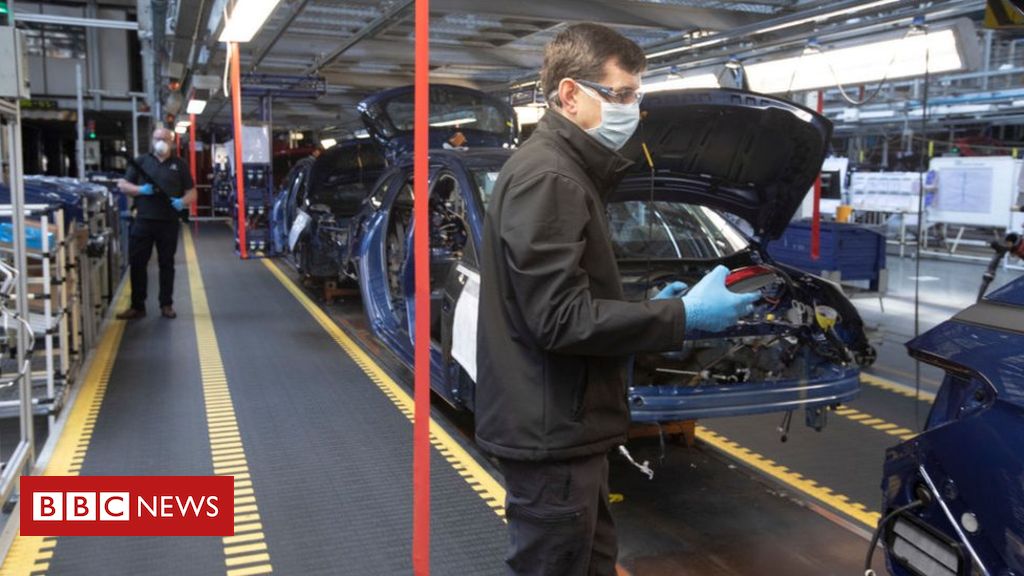 Coronavirus: How can the car industry hope to recover?

Coronavirus: How can the car industry hope to recover?


For weeks, the UK’s motor industry has been in suspended animation.

Showrooms have been closed. Vast factories, which normally produce hundreds of cars every day for sale here and abroad, have been standing idle. But now the sector is slowly shuddering back to life.

So far only a handful of factories have resumed operations, among them BMW’s engine plant at Hams Hall, just outside Birmingham, Bentley’s headquarters in Crewe, and Toyota’s engine facility at Deeside, North Wales.

Others will follow next week, including the BMW Mini plant near Oxford, Jaguar Land Rover’s (JLR’s) sites in Solihull and Wolverhampton, Ford’s engine factories in Dagenham and Bridgend, and Vauxhall’s van manufacturing facility in Luton.

But Nissan’s factory in Sunderland will remain closed until June, JLR has yet to say when its Castle Bromwich and Halewood plants will reopen, and it is a similar story with Vauxhall’s other site at Ellesmere Port.

The trend is broadly similar in Europe, where major manufacturers such as PSA Group, Renault and Daimler are slowly bringing plants back online. Among those that have already reopened is the world’s largest car factory, Volkswagen’s huge facility in its home town of Wolfsburg.

Part of the problem is that although car companies can decide when to reopen their plants, and to what extent they can resume production, there are other factors that they cannot control. Notably, they don’t know when showrooms will be allowed to reopen, and when customers will actually want to buy new cars.

The earliest that showrooms could potentially unlock their doors again in England is 1 June, as that is the date that Prime Minister Boris Johnson has set for when “non-essential” retailers will hopefully be allowed to reopen. Scotland, Wales and Northern Ireland have not put down target dates.

Vauxhall’s managing director Stephen Norman has told BBC Newsnight that he wants UK showrooms to open as soon as possible.

In the meantime, car buyers in England will now be able to order a vehicle online, and then go and pick it up from outside a dealership, the Society of Motor Manufacturers and Traders (SMMT) trade body said on Wednesday. But under this “click and collect” scheme, the showrooms will remain closed.

The future, for an industry that it is claimed supports more than 800,000 jobs in the UK, remains deeply uncertain.

The crisis in the car industry began in February, when the Covid-19 outbreak in China forced factories to close, and sales in the country – one of its biggest global markets – collapsed.

As the disease spread, so too did the disruption. An outbreak in Italy and the introduction of lockdowns there threatened European supply chains, and worse was to come as further restrictions were put in place in France. By mid-March shutdowns in the UK had become inevitable.

There were three main concerns for manufacturers. Parts supplies were drying up because much of what was needed came from abroad. At the same time, showrooms were closing, and companies were becoming increasingly worried about the health of their staff.

“These factors were all coming together at the same time,” explains Jim Crosbie, managing director of Toyota Motor Manufacturing UK.

“Demand had obviously dropped away, we were starting to get concerns about supply, and then of course the government was clearly taking more strict measures around safety.

“Since then, we’ve had a skeleton crew going into each plant, just to make sure equipment was ticking over.”

Car companies are accustomed to halting production lines from time to time, for maintenance, or to accommodate new designs, for example. But in this case, restarting the factories is much more of a challenge – largely because of the need to make them “Covid-safe” to protect staff from infection.

Each manufacturer has its own plans. Vauxhall, for example, says it has put in place more than 100 measures to ensure the safety of employees at its plants in Ellesmere Port and Luton, when they reopen.

Workers will have their temperatures checked on site, will wear safety glasses and masks, and will be expected to maintain a safe distance from one another.

Similar steps are being taken at Toyota. The company restarted its engine plant on Deeside this week, to cater for demand from overseas markets. Its car assembly factory at Burnaston in Derbyshire is expected to resume work later this month.

There is now a strong emphasis on maintaining social distancing in the factories. “We have floor markings in all areas, but we’ve also changed some of our processes,” explains Toyota’s Deeside plant boss Tim Freeman.

“We’ve put screening up to segregate certain processes. And where our employees take their breaks in rest areas, we’ve limited the occupancy of those areas, and created some temporary additional rest areas.”

He says employees will also be given a “multi-tool” to do things like opening doors or operating push-button microwaves, in order to avoid touching surfaces that could harbour infection.

All workers will have to wear masks and each of them will have an individual bottle of hand sanitiser to use. These measures, Mr Freeman stresses, have been drawn up in consultation with Unite, the factory workers’ union.

Unite representative Pete Tsouvallaris says he is very happy with the measures that have been drawn up. The problem now, he believes, is persuading shop floor staff that they really can come to work safely.

“Many of our members are obviously worried because they haven’t been on site yet,” he says. “Those who have been on site and have seen the steps that are being taken are less concerned. But what really doesn’t help is the mixed messages coming from the government. It’s confusing.”

For Mr Tsouvallaris, the main concern is what happens when production gets under way in earnest. He is worried that workers might find it difficult to maintain all the new precautions.

“Building cars is uncomfortable at the best of times,” he says, “so what is going to happen when it gets hot and you’re wearing masks and lots of PPE?”

The risk, he says, is that if production rates rise too quickly workers might become careless. He thinks it is essential that managers stay “reasonable” with their demands.

He is also worried about what could happen at smaller suppliers, who have smaller premises and fewer resources than the big car firms.

Reopening factories is just part of the story, however.

Although some cars are sold online or through other remote channels, most still find their way to buyers through dealer showrooms – and in the UK, those showrooms remain closed.

So it is no surprise that the first factories to reopen are those supplying markets abroad. JLR’s Solihull plant, for example, makes models that are popular in China – where sales are recovering.

Graham Hoare, chairman of Ford of Britain, thinks it is vital that British showrooms are able to open as soon as possible.

“Dealerships being open is a fundamental requirement to selling cars,” he says. “The vast majority of our products go through dealerships.

“Opening those dealerships… that really unblocks the cork out of the bottle that then allows the whole manufacturing system to flow.

“That’s already happened on the continent – in Germany and the rest of Europe. It’s building, and we need to do the same here.”

People will only buy cars if they can afford them though, and with the economy expected to go into a steep recession, that can not be guaranteed.

Nevertheless, he says it is essential that showrooms reopen soon.

“If you reopen retail, you can stimulate demand… and that will help manufacturing. Do that right and the benefits in terms of the economy, and in terms of people’s jobs and livelihoods will be felt pretty quickly.”