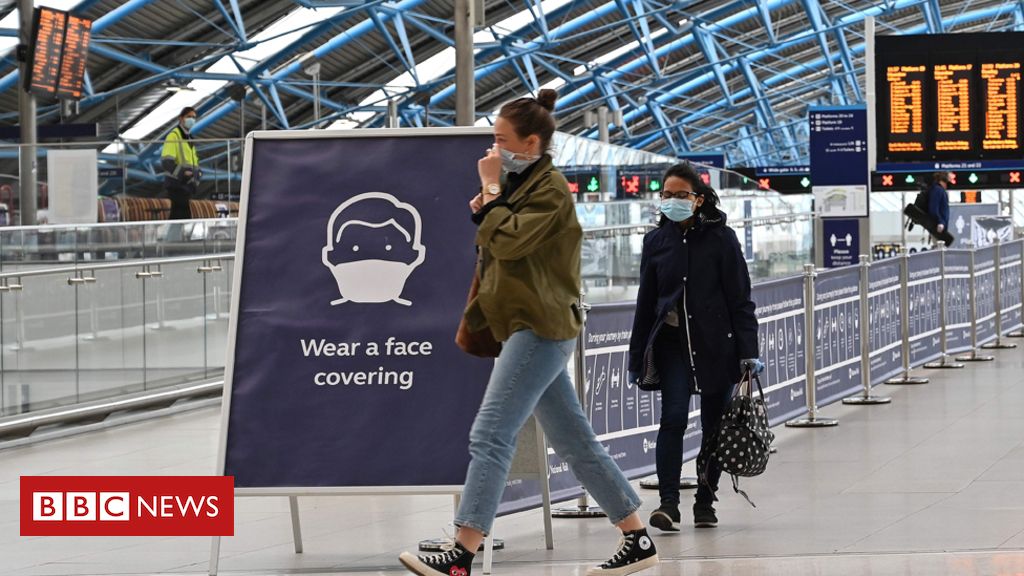 
Anyone travelling on public transport in England must wear a face covering from Monday under a new rule.

More than 3,000 extra staff including police officers are being deployed at stations to make sure people comply.

Passengers without a covering will be asked to wear one, or will face being refused onboard or fined £100.

People with certain health conditions, disabled people and children under the age of 11 will be exempt from the rule.

In the coming days, hundreds of thousands of free coverings will be handed out at railway stations. The government says masks can be homemade, such as a scarf or bandana.

As well as on transport, all hospital visitors and outpatients also have to wear masks.

The UK government changed its advice on face masks to stop the spread of coronavirus earlier this month, as more people used public transport to go back to work. It is now in line with the World Health Organization’s advice.

The new rules apply to England and require anyone travelling by bus, coach, train, tram, Tube, ferry or plane to cover their face while on board.

They exclude school transport, taxis and private hire vehicles – although Uber has made face coverings compulsory for passengers and drivers.

The rules apply only while travelling – not while waiting – but the rail industry has asked people to cover their face as they enter a station.

The compulsory rules do not apply in Scotland,Wales or Northern Ireland – but their governments recommend that people cover their faces in places where social distancing is difficult, including on public transport.

Passenger numbers are expected to reach about 20% of capacity on the railways by early next month.

He also urged people against using medical masks, saying they must be kept for clinical settings.

More than 3,000 extra staff from British Transport Police, Network Rail, train operators and Transport for London are being deployed at major stations and transport hubs.

Rail unions have welcomed the face masks rule – but have called for social distancing to still be followed and transport workers to be treated with respect.

The head of the Transport Salaried Staffs Association (TSSA), Manuel Cortes, said: “This must not be seen as a green light among the wider population to use public transport.

“It must remain the case that only the key workers who are keeping us safe during the pandemic continue to use public transport.”

The government urges people to consider all other forms of transport before public transport.

All NHS hospital staff (not just medics), visitors and outpatients will also have to wear face coverings in England.

The government said people should arrive at hospital with a face covering, but if not a face mask will be provided in emergencies.

However, the doctors’ union the British Medical Association has criticised the government for not properly planning for the rules in hospitals, saying some NHS services have been left “confused and unprepared”.

The BMA said it was inappropriate for hospitals to have to supply masks to patients and visitors who arrive without a covering, especially following shortages of some types of personal protective equipment.

The new face covering rules will “inevitably lead to an increased demand”, the BMA said.

The government said it has adequate stocks of face masks to meet demand and continues to pursue contracts for additional stock. It said more guidance for hospitals will be published on Monday to allow hospitals to get stocks and plans in place.

Also on Monday, all non-essential shops can reopen in England for the first time since the lockdown began.

It comes as a further 36 people died with the coronavirus in the UK, taking the total to 41,698, the UK government announced on Sunday.

The latest daily figure is the lowest since before lockdown began on 23 March, but there tends to be fewer deaths reported at the weekend, because of a reporting lag.

Meanwhile, France is lifting a number of coronavirus restrictions on Monday. Cafes and restaurants can open, travel to other European countries is allowed.

Several other countries in Europe including Belgium, Croatia, Switzerland and Germany are also reopening their borders between EU countries on Monday.