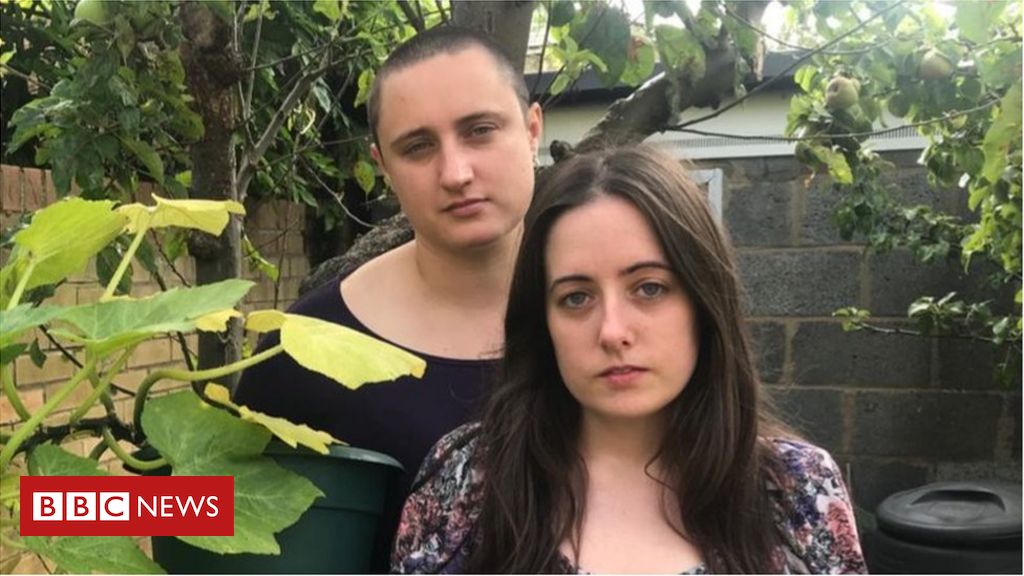 
A five-month ban on landlords evicting tenants in England and Wales ends this weekend, in stark contrast to elsewhere in the UK.

Courts will start hearing cases put on hold owing to the coronavirus crisis from Monday.

Stricter rules will be in place, but in Scotland and Northern Ireland bans are planned to be extended until March.

Renters have argued the financial and practical effects of the crisis mean they should not be thrown out.

Among them are Meghan Butt and her wife Faith Taylor. They are facing a section 21, so-called no-fault, eviction notice meaning they will have three months to leave the property in Hackney, London.

“This home has been a sanctuary during lockdown, and our first as a married couple,” said Meghan, who studies horticulture and runs a dog-walking business in the area.

“It is really hard to plan life at the moment anyway. This puts us on the edge of our seats.”

The government ultimately wants an end to section 21 evictions, but that will need legislation.

In the meantime, tenants are getting a minimum of three months’ notice of eviction in England – a timeframe ministers could decide to extend – and six months in Wales, until at least 30 September, compared to two months before the coronavirus outbreak.

A survey by homelessness charity Shelter suggested that more than 170,000 private tenants have been threatened with eviction by their landlord or letting agent, and 230,000 in England have fallen into arrears since the pandemic started.

Charity Christians Against Poverty said: “The crisis is not over. For many people, especially those who were struggling financially before the crisis, it’s just beginning.”

The District Councils Network (DCN) has estimated that up to 500,000 people could be at risk of being evicted as they spend more than half of their income on private housing rent, and health bodies have warned that homelessness or moves to overcrowded accommodation could risk higher numbers of Covid-19 infections.

Citizen’s Advice warned that one in nine people had reported falling behind on household bills. With the eviction moratorium and a ban on face-to-face bailiff collection ending this weekend, “many of those struggling may face harsh enforcement”, the charity said.

A spokesperson for the Housing, Communities, and Local Government Department said the government had taken “unprecedented action” to support renters during the pandemic and would continue to support those affected when the eviction ban lifts.

“We are working on how best to continue supporting renters and landlords during the pandemic and will make an announcement on the next steps shortly,” the spokesperson said.

With other parts of the UK having already announced further help for tenants facing eviction, Ministers in England are now under pressure to help up to a quarter of a million tenants who are at risk of losing their home.

Councils have warned that housing departments will struggle to cope with a steep rise in homelessness applications.

With an acute shortage of temporary emergency housing, local authorities might need to move homeless individuals and families away from their locality and house them in budget hotels.

The County Courts in England have a backlog of 40,000 eviction cases and it’s feared they won’t have the capacity to deal with tens of thousands more, particularly when the government’s jobs furlough scheme ends in October.

Social distancing means most courts cannot operate at full capacity and it is estimated that it may take a year simply to deal with the eviction disputes in the system before lockdown.

This is a huge concern to landlords who rely on rental income to pay their bills, including their own housing costs.

If they cannot evict troublesome tenants or those who have significant rent arrears, their businesses may collapse.

The government is committed to ending ‘no fault evictions’ in its manifesto and some housing charities argue this would reduce the number of people losing their home and bring greater certainty to the rental system.

But Ministers have been consulting on such a reform and have found it hard to devise a system that doesn’t have unintended consequences.

With just two days to go until the ban ends, any change in policy now is likely to be characterised by their opponents as another last-minute U-turn.

David Batchelder, 35, was laid off from his job in pest control at the start of lockdown.

He lives in a flat in High Wycombe with his partner, who works as a building company receptionist, and at the moment is a stay-at-home dad to one-year-old daughter Miley.

The fall in income and reliance on benefits means he is worried about the future.

“In all honesty, [benefits] are not enough and just do not cover everything,” he said.

“In difficult times there is a possibility that we could end up losing our home. We would like to know that we’ve got somewhere secure.

“The landlords have been very good so far, but they can only do so much. And if there was another coronavirus wave, it will be very worrying as to what might happen.”

Lawyers and landlords’ groups have said that, despite the end of the ban, there is little expectation of people who have faced Covid-related financial problems being swiftly told to leave properties.

Chris Norris, policy director for the National Residential Landlords Association, said: “Our research clearly shows that the vast majority of landlords and tenants are working together constructively to sustain tenancies wherever possible.

“We need the courts to deal with cases where tenants are committing anti-social behaviour or where there are long-standing rent arrears that have nothing to do with the pandemic.”

Government measures mean more evidence is needed from landlords for the courts to agree to a possession.

“It is unlikely that we will see an immediate spike in evictions and certainly not tenants kicked out onto the streets the following day. Landlords are bound by strict rules designed to slow the process down,” said Jacqui Walton, from law firm Royds Withy King.

In Wales, tenants who have fallen into arrears are being aided with a saving scheme.

Landlords groups have called for more help in England to reduce the financial pressures on landlords, in addition to mortgage holidays.