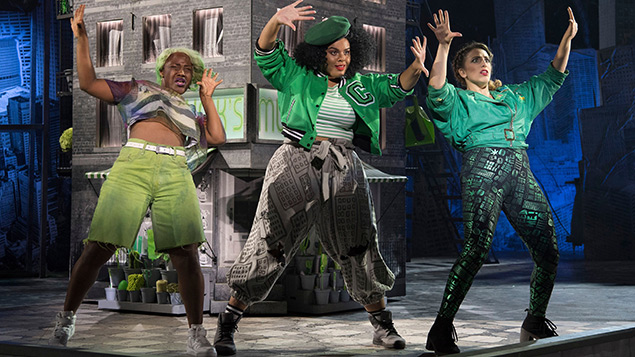 Seyi Omooba (left) in a production of the Little Shop of Horrors in 2018. Photo: Alastair Muir/Shutterstock

An actress who was stripped of a role following the discovery of anti-gay comments on Facebook has lost a tribunal claim for religious discrimination.

Seyi Omooba was given the lead role of Celie – who has a lesbian relationship – in the musical The Color Purple, a co-production of Alice Walker’s classic novel at Leicester Curve and Birmingham Hippodrome, in March 2019.

But the day after the cast was revealed, Aaron Lee Lambert, who stars in Hamilton in the West End, posted a screenshot of a 2014 Facebook post in which Omooba said “though the law of the land has made [homosexuality] legal, it doesn’t mean it’s right”. In his post Lambert asked if she stood by the post in the light of her casting as a LGBTQ character.

A social media backlash called for Omooba to be removed from the cast, and she received racist abuse online. Her agent, Global Artists, called to tell her that pressure was mounting and that only through retracting the comments and publicly apologising would she be able to continue under their management. She refused to do so.

@Seyiomooba Do you still stand by this post? Or are you happy to remain a hypocrite? Seeing as you’ve now been announced to be playing an LGBTQ character, I think you owe your LGBTQ peers an explanation. Immediately. pic.twitter.com/GK2xbzZYgy

Omooba, who visibly prays before performances, accepted the lead role of Celie after originally auditioning for the character of Nettie, and disagreed with the interpretation that Celie is gay.

The central London employment tribunal heard that Omooba had previously informed her agent that she would not play a homosexual role. Similarly she had asked not to be considered for Book of Mormon because of its mocking of Christian faith.

She had been offered her full salary of £4,309 but she had failed to invoice for it.

The tribunal dismissed Omooba’s claims of  discrimination against both the theatre and her agency, as well as claims of harassment and breach of contract.

“We concluded that while the situation would not have arisen but for the expression of her belief, it was the effect of the adverse publicity from its retweet, without modification or explanation, on the cohesion of the cast, the audience’s reception, the reputation of the producers and ‘the good standing and commercial success’ of the production, that were the reasons why she was dismissed,” read the judgment.

“The centrality of authentic depiction of a lesbian role was a key part of the factual matrix. It was not necessary that she should be a lesbian, but it was important that she was not perceived by audience and company as hostile to lesbians. The decision to terminate was made to deal with the dysfunctional situation that arose from the context and circumstances of the public retweeting. The religious belief itself was not the reason why the theatre decided this. It was the commercial and artistic reality of the cluster of factors that it would not succeed.”

In a joint statement, Leicester Curve’s chief executive Chris Stafford and artistic director Nikolai Foster welcomed the ruling, saying: “Seyi Omooba accepted a lesbian part in our production of The Color Purple knowing full well she would refuse to play this iconic gay role as homosexual. We believe the case had no merit from the outset, and should never have been brought to the tribunal.

“Unfortunately, we consider that Curve has been subject to a carefully orchestrated campaign from Seyi Omooba and Christian Concern, who have used the tribunal process – and our theatre – as an opportunity to further their case in what they describe as exposing ‘the mechanisms of censorship at the heart of the theatre industry, and how any dissenting views against LGBT ideology, especially Christian beliefs, are currently incompatible with a theatrical career.’ We know this is not true; theatre is one of the most inclusive, joyous and diverse industries and we celebrate this across all of our work at Curve.”