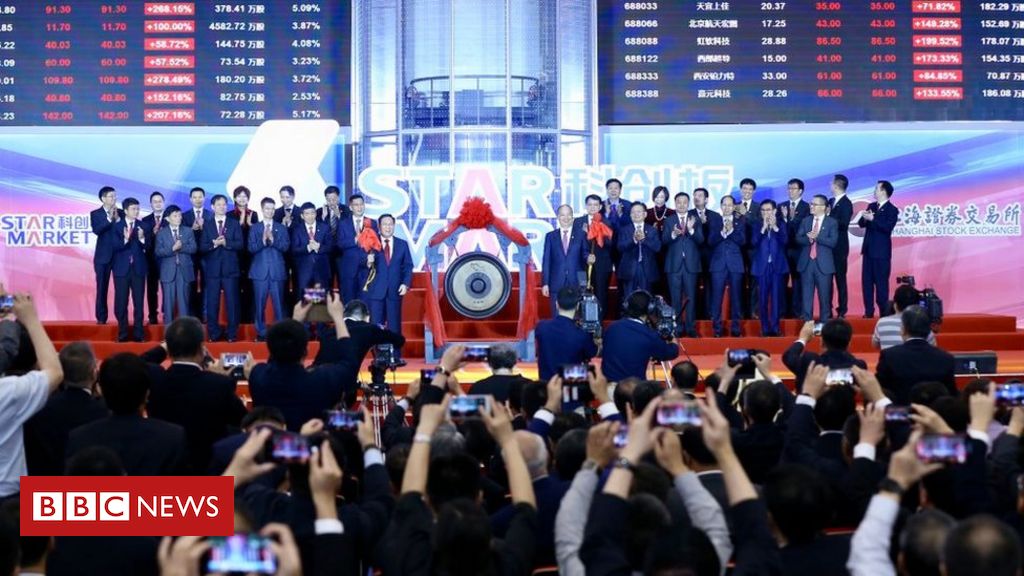 China’s Star market aims to take on the Nasdaq

China’s Star market aims to take on the Nasdaq


The Star market, China’s answer to the Nasdaq, celebrates its first anniversary this week.

The tech-heavy stock market was set up at the request of President Xi Jinping as relations with the US began to sour.

This month it hit a record level in terms of new listings as it raised more than $7bn, a 46% increase on July 2019 according to figures from data firm Refinitiv.

This was boosted by last week’s listing of semiconductor manufacturer SMIC, China’s biggest share sale in a decade.

Experts believe the Star market is in a strong position to attract listings from both Hong Kong, given the political tensions there, and the US which is clamping down on the listing of Chinese firms.

But can it rival the Nasdaq 100 which is more than 20 times bigger?

This index features some of the world’s most valuable technology companies including Apple, Microsoft and Amazon. It was worth almost $10tn at the end of 2019.

To mark its first year anniversary, the Star market announced on Thursday that it was also splitting off its biggest listings, to be included in the Star Market 50 Index.

“The move to fully open the Chinese capital markets is obviously a long term reality – so the success of a mainland-type Nasdaq is always going to happen in the future,” said Andy Maynard, managing director at China Renaissance investment bank.

“The reality of the size and complexity of China’s new economy play will always make China attractive globally – just as Nasdaq has done since the ‘dot.com’ days.”

“The conditions are very attractive and would definitely make the Star Market a worthy rival of the Nasdaq,” added Jacob Doo, chief investment officer at Envysion Wealth Management.

A major factor is that the Star market’s listing requirements “are less stringent as compared to the Nasdaq, which has imposed restrictions on IPOs for Chinese companies”, Mr Doo said.

Ant Group – Alibaba’s financial arm – plans to list on the Star market this year and could attract more tech companies to follow suit.

However, experts say the Star market needs to be more accessible to foreign investors to continue to attract more listings.