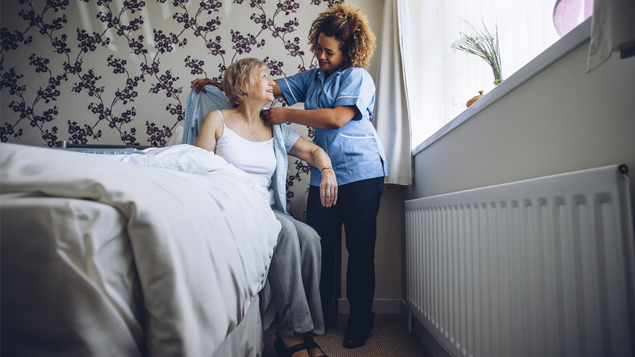 A group representing the health and social care sector has expressed ‘grave’ concern about the number of staff care homes would be able to recruit when the new points-based immigration system comes in.

While the proposed new system does include migratory routes for registered health and care professionals to live and work in the UK, social care staff are excluded and many would not earn enough to meet the £25,000 annual salary threshold, the Cavendish Coalition said.

In a letter to Prime Minister Boris Johnson this week, the 37 leaders of national care providers including the NHS Confederation – the body that represents NHS leadership – said: “We share a profound concern that the resulting Immigration Bill and proposals are swiftly heading towards an alarming destination with no obvious solution for the care sector.

“Our international care workers make a phenomenal and essential contribution to our health and care sector, and without them here, patient care would be unsafe. In social care, without them we will see reductions in beds, care homes will close and people will be starved of the help they need and deserve in their own homes, which is critical to them living well.”

The letter stated that one in six people who worked in the care sector were overseas nationals.

Currently, there are 122,000 vacancies in the sector in England alone.

By contrast, the Nursing and Midwifery Council has reported an 18,000 increase in the number of nurses and midwives registered to work in the UK in the past year, although it has expressed concern about how the coronavirus will affect its ability to recruit and retain staff from overseas.

The Cavendish Coalition said it would be unwise for the government to assume that domestic recruitment would “solve” the social care sector’s staffing problems.

“Indeed, a recent survey of health and care workers found that one in five are likely to leave their roles following the pandemic. Retention will become a growing problem for the social care sector which is vulnerable, as highlighted during Covid-19 with social care workers twice as likely to die from Covid-19 as the general population,” the letter adds.

The group reiterated the concerns raised by the Migration Advisory Committee about the lack of competitive terms and conditions in social care roles, which meant many UK citizens did not consider a role in the sector.

Care workers in England earned between £16,400 and £18,400, which the Cavendish Coalition noted fell well below the Immigration Bill’s proposed £25,000 salary threshold.

“It is critical that the government ensure a transitional solution is in place for social care in January 2021 to navigate the gap between the introduction of the new immigration system and a longer term plan and funding settlement for social care in England; an urgent domestic priority which you re-committed to in your recovery speech last week,” the letter urges the Prime Minister.

“The proposed new immigration system must provide a migratory route for social care staff; they are and always have been key workers. If praise does not turn swiftly to action, the applause of an appreciative nation will echo hollow and we will have fewer carers to hear them.”

In a statement, the Home Office said it wanted employers to focus on “investing in our domestic workforce”.

“Additionally, the EU Settlement Scheme means that all EU and EAA citizens, and their family members, currently working in social care can stay in the UK and we are encouraging them to do so,” it added.