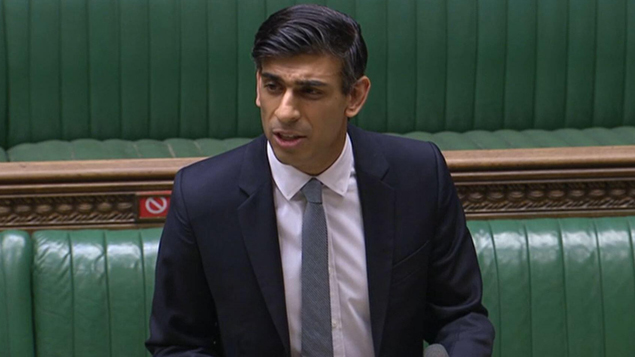 Undoubtedly, the most important announcement for employers to come out of this year’s budget has to be the extension of the Coronavirus Job Retention Scheme until 30 September 2021, which will provide a lifeline to organisations that will still be affected by restrictions on social contact into the summer months.

However, numerous surprises were revealed in chancellor Rishi Sunak’s budget this afternoon, including two “help to grow” schemes to enable small businesses to recover; an unsponsored points-based visa for high-skilled science “entrepreneurs”; and “restart grants” for retail, hospitality and leisure businesses.

Announcing the measures in the House of Commons today Sunak said: “I said I would do whatever it takes [to protect jobs and livelihoods]. I have done, and I will do so.”

Formally announcing the furlough extension, he said: “The government is proud of the furlough, one of the most generous schemes in the world.

Employees will continue to receive 80% of their wages while on furlough until September However, from July, the employers will need to contribute 10% towards employees’ wages, followed by 20% the following month, on top of continuing to pay national insurance and pension contribution.

He said this was a “budget that protects the jobs and livelihoods of our people”.

To support low income households, the universal credit uplift of £20 per week will continue for a further six months, and Sunak reiterated that the national living wage will increase to £8.91 per hour from 1 April.

However, he admitted that the government had borrowed a record amount over the past year in order to support businesses and working people.

“Coronavirus has caused one of the largest and sustained economic shocks this country has ever faced.”

“Today’s forecasts make clear that repairing the damage will take time,” he said, adding that the economy has shrunk by more than 10% over the past year, the largest reduction 300 years.

Despite this, Sunak announced that income tax and VAT will not be increased. However, the personal tax thresholds before tax is paid will increase next year: the threshold for paying the basic rate will rise to £12,570, while for higher-rate payers the threshold will be £50,270. Both rates will stay the same until 2026.

Other announcements in the budget included:

Extending the furlough scheme beyond 30 April will help buy crucial time for the Covid-19 vaccination programme to be rolled out across more of the working population and will allow economic recovery to “take root”, which will help stem redundancies, said the CIPD’s head of public policy Ben Willmott.

Recognising that it will take time to transition back to normality will be key for all businesses, not just those accessing the furlough scheme” – Andrew Secker, Mills & Reeve

“This action will save thousands of viable jobs, which otherwise would have been lost if the scheme had finished at the end of April, and could help ensure that unemployment undershoots the official forecasts,” he said.

The decision also reflects the fact that demand in some sectors, such as hospitality, is set to be lower than pre-pandemic levels because many people will continue to be cautious before recieving their second vaccination, said employment lawyer Andrew Secker, of Mills & Reeve.

“Recognising that it will take time to transition back to normality will be key for all businesses, not just those accessing the furlough scheme,” said Secker.

“The recent debate about compulsory vaccinations at work shows the level of concern that exists about the transmission of Covid-19 through work, and this will no doubt influence when and how businesses open and workers return to offices in the coming months.”

Jane Fielding, head of employment at law firm Gowling WLG, suggested that an alternative approach may have been targeted support for industries hit particularly hard by the pandemic, but the extension of blanket support “will give more breathing space not just to those industries but all employers and their staff continuing to face challenges”.

However, not all commentators felt the measures announced in the budget went far enough to alleviate the challenges faced by employers and workers.

Jaluch HR founder Helen Jamieson said that providing furlough wage support met only employees’ basic needs and disincentivised staff from seeking alternative work; training for something new; developing their skills; and “branching out”. It also meant that employees were missing out on the sense of belonging offered by the workplace.

“Furlough, whilst well intentioned is holding everyone down. As a Western nation we are trained to aspire to self-actualisation. We are aiming for the top and encouraged to do so. Now we are stuck at the bottom, that is devastating. Far more so than if we had always been there,” she said.

Furlough, whilst well intentioned is holding everyone down.” – Helen Jamieson, Jaluch HR

“In spring last year it would’ve been far better to invest government money in training, retraining, jobs creation, innovation than to put people into a holding pen that slowly eats away at their confidence. In particular, furloughing workers where their industry is changing dramatically for the long term, meaning they will not be returning to jobs they left is not helpful. It is damaging self-esteem, damaging social interactions and damaging career prospects. Put money into jobs creation and skill development, where it will truly build back better.”

Drop in the ocean

Nigel Morris, employment tax director at MHA MacIntyre Hudson, said extending furlough was only a drop in the ocean and called for a return of the Job Retention Bonus scheme.

“This would be especially helpful to those employers who need to phase the return of their employees back to work. The prospect of a one off payment when furloughed employees return to work would give them an extra ‘crutch’ if they need to fund furlough and employer’s NIC after April 2021 until their businesses are able to fully open again,” he said.

“Looking ahead, it is surely worth the chancellor’s time to consider whether some kind of furlough scheme should become permanent, perhaps along the lines of arrangements available in France, Germany or the USA. With the rise of new Covid-19 variants other, hopefully less restrictive, lockdowns in the autumn or winter can’t be ruled out. The UK should think about drawing up plans for a more long-term but less generous retention scheme until we are totally clear from the pandemic.”

“Hopefully the repayment terms of the new loan scheme will clearly show that the government is actually supporting businesses. Repayment terms should be flexible, at least initially, to provide essential cashflow support, and allow for repayment over a 10 year period to allow businesses the time to recover,” said Pandya.

“With digital transformation encroaching on all industries, the announcement today on supporting skills growth by doubling incentives to hire new apprentices to £3,000 per adult apprentice hire and tripling money for traineeships, which is very much welcomed. This is a vital step in growing the skills of tomorrow as well as supporting the UK economy to build back up after a year of turmoil,” she said.

Nearly one in five young people in employment are currently on furlough, meaning youth unemployment may well spike when the support scheme ends in September” – Andrew Hunter, Adzuna

However, Andrew Hunter, co-founder of job search engine Adzuna, highlighted the “cavernous career gap between men and women, and the old and young” and urged the government to “do more to encourage businesses to create entry-level opportunities and flexible working options”.

“Add to this the worrying state of youth unemployment, currently sitting at 14.2%. Nearly one in five young people in employment are currently on furlough, meaning youth unemployment may well spike when the support scheme ends in September. Competition for entry-level roles will become even fiercer when the class of 2021 graduates this summer. The next six months will be a critical period for creating more entry-level jobs, before the tidal wave of young people hits the jobs market,” said Hunter.