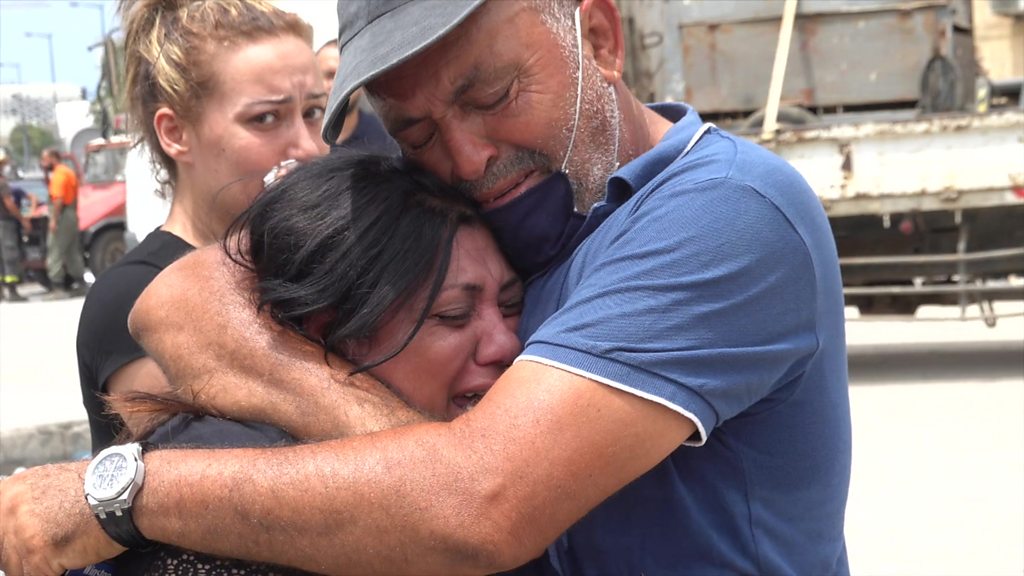 
International leaders will hold talks on Sunday to raise aid for Beirut after the massive explosion which devastated the Lebanese capital on Tuesday.

The virtual conference – set up by France and the United Nations – will begin at 1400 Lebanon time (1100 GMT).

US President Donald Trump has said he plans to join the call.

Officials estimate the blast at the warehouse, which stored 2,000 tonnes of ammonium nitrate, caused up to $15 billion (£11.5bn) in damage.

On Saturday several thousand people took to the streets, with police firing tear gas at stone-throwing protesters and some demonstrators storming government ministries.

In a televised address, Lebanese PM Hassan Diab said he would ask for early elections as a way out of the crisis. The issue will be discussed in cabinet on Monday.

Lebanon was already mired in a deep economic crisis and struggling to tackle the coronavirus pandemic before the explosion tore through Beirut.

An anti-government protest movement erupted last October, fuelled by the financial situation and a collapsing currency.

French President Emmanuel Macron visited Beirut on Thursday, and announced he wanted to coordinate international aid for the country.

A statement from France’s presidential palace says Sunday’s conference “will aim to mobilize Lebanon’s main international partners and to organize and coordinate emergency support from the international community”.

Representatives from European Union member states, China, Russia, Egypt, Jordan and the UK will all take part, with many others invited to attend.

In a series of tweets, President Trump said he had discussed the “catastrophic event” in Beirut with Mr Macron and would himself join the call.

“Everyone wants to help!” he wrote.

…We will be having a conference call on Sunday with President Macron, leaders of Lebanon, and leaders from various other parts of the world. Everyone wants to help!

A number of countries have already pledged millions of dollars worth of aid and sent ships, health workers and materiel to assist Beirut.

But UN agencies have called for more help and warned about the massive challenge ahead. Many homes are without water or electricity, there are growing worries about food shortages, and cases of Covid-19 are spiking in the country – an additional challenge for hospitals which are already overwhelmed.

“The needs are immediate and they are huge,” Unicef spokeswoman Marixie Mercado told reporters in Geneva on Friday.

What happened at the protests?

The aid conference comes amid ongoing fury about the government’s failure to stop the blast.

Between 5,000 and 10,000 people gathered for demonstrations on Saturday, to show that rage and also to remember those victims of the explosion.

As the protests got under way, mock gallows were erected in Martyrs’ Square to indicate the demonstrators’ view of the country’s political leaders.

Skirmishes began early on, with police responding to rocks and sticks thrown by protesters with rubber bullets and tear gas.

Police confirmed to Reuters news agency that live ammunition had been fired in central Beirut, though it is not clear by whom.

One officer died after falling into a lift-shaft in a hotel, reportedly after being chased there by protesters.

The local Red Cross said it treated 117 injured people at the scene. Another 55 were taken to hospital.

Dozens of protesters stormed government ministries and the headquarters of the country’s banking association.

The raids started after a group of people chanting anti-government slogans and burning a portrait of President Michel Aoun entered the foreign ministry and called for all ministries to be occupied.

Reports suggest security forces have since retaken the buildings from the demonstrators.