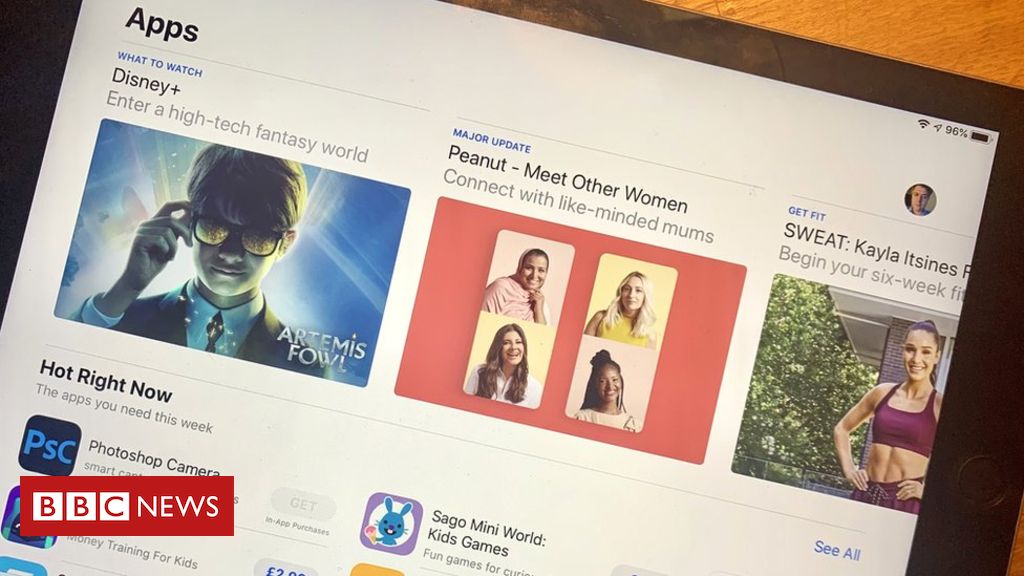 
Apple has said that its App Store ecosystem “facilitated half a trillion dollars” of trade in 2019.

The firm said more than 85% of that figure occurred via transactions from which it did not take a commission.

The announcement comes at a time Apple and other US tech giants are facing increased anti-competition scrutiny.

A leading developer have also called on the iPhone-maker to lower the fees it charges, ahead of its annual developers’ conference next week.

An Apple representative told the BBC that it was proud of the commerce that it had enabled and welcomed scrutiny of its App Store.

The study was commissioned by Apple but carried out by economists at the Boston-based consultancy Analysis Group.

It surveyed billings and sales related to apps running on the tech firm’s iOS, Mac, Watch and Apple TV platforms.

The report attempted to account for spending that occurred externally but led to content being used within an app – for example a direct payment to Spotify, whose songs were then listened to via its iPhone app.

Likewise it subtracted a proportion of the charge of in-app purchases whose content was used elsewhere – for example a Now TV subscription taken out via Sky’s app, if most of the shows were then watched directly on a TV’s own app.

In total, the economists said $519bn (£406bn) had been generated via Apple’s software ecosystem. The figure excludes sales generated by the Android and Windows versions of the same products.

Physical goods and offline services accounted for the biggest share of the sum – $413bn.

By contrast, digital goods and services – from which Apple typically takes a 30% cut – accounted for $61bn.

(Sales in billions of dollars)

The study’s publications coincides with a call by the US House Judiciary Committee for Apple’s chief executive Tim Cook and other tech leaders to answer questions about anti-trust concerns, according to reports.

News site Axios said on Friday that the committee also planned to compel Apple, Google, Amazon and Facebook to disclose internal documents about their digital markets if they did not share them voluntarily.

Apple plans to host its Worldwide Developers Conference next week. Ahead of the event, the co-founder of a leading business software developer published its own list of concerns about Apple’s business practices.

Among changes called for by Omni Group’s Will Shipley were:

“Apple has a market cap of about $1.5tn and it extracts more margin than any other company from the mobile phone market,” commented Ben Wood from the consultancy CCS Insight.

“It’s keen to remind people that it has had to work to build this platform. But now it has become so powerful, it’s unsurprising that people are questioning whether the original terms of engagement are still fair.”